“Whilst trees are vital to the creation of the Forest, they aren’t the whole story.  It’s about extracting all the benefits possible from the new ‘forest’ landscape being created – improved leisure opportunities, transformed perceptions, increased wildlife, engaged local communities and revitalized economies, plus a future timber supply.  So much more than just the trees.”  (source: marstonvale.org: 12 May 2015). 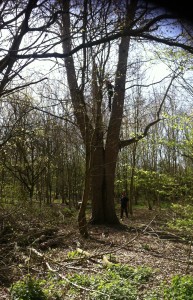 Large Hybrid Poplar with contractor Chris Pratt weighing up the plan of attack .

Woodland management is about constant regeneration and renewal.  It’s a cyclical process – fell, plant, nurture, thin and (eventually) fell again.  The old is replaced with the new and nothing lives forever.  Managed sympathetically, the visible changes can be almost seamless.  Some may have noticed part of this process has being going on the western side of the woods where a number of young ash trees have been thinned.  The remainder will be allowed to grow and further thinning may be required.  However, for me it’s a sad time when a mature tree needs to come down.  But a mature poplar is not like a veteran oak: poplar will never stand the test of time.  If left to their own devices, poplar seem to just get bigger and bigger until, eventually, they spectacularly self-destruct in a good gale.  This had already happened to an enormous poplar in the February gales of 2014.  Fortunately, it was in an area closed to visitors so the risk was minimal.  However, on the Sustrans trail, about half way between the Church End Bridge and Octagon Wood, there was an equally big poplar (possibly the biggest in the woods) which was showing signs of severe distress and was in a very dangerous condition.  It had already shed a significant branch of approximately 30cm in diameter.  Precariously hung up in an adjacent tree, this branch was just waiting to crash down upon any unsuspecting individual walking below!  What remained of the poplar’s upper trunk had seen some serious woodpecker action and was dead, rotten and full of holes.  Worryingly, the lower main trunk had a big vertical fissure which was oozing black goo (possibly bacterial wet wood) which was indicative of an imminent catastrophic event.  All of this was going on just too close to the footpath to be ignored. 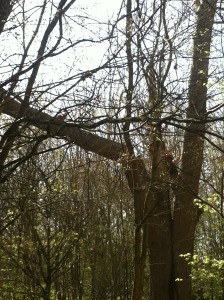 There she goes. Nick safely takes down one of the stems

Chris Pratt, of Marston Vale Tree Care, was contracted to make the tree and surrounding area safe.  The idea was to remove a considerable amount of weight but leave a significant chunk as potential habitat.  Chris’s colleague, Nick Churcher, donned specialist climbing gear in preparation for a habitat survey (nesting birds, etc).  If found, then it would be game over until the end of the breeding season; the discovery of bats would invite a whole new strategy, requiring contact with the local Statutory Nature Conservation Organisation for advice.  Bats are protected by law which means it is illegal to disturb them or damage, destroy or obstruct access to their roosts.

Meanwhile Chris assessed the tree from the ground to decide on the best way forward.  This was a big tree; the photo with Chris stood at the base give an impression of its size.  To reduce the damage to surrounding trees, it would be dismantled in sections.  From above, Nick reported that there were no occupants so we were good to go.  I say “We” as yours truly was to stand lookout on the path and corral wandering visitors at the critical moments.  It’s a responsible job which involves giving an impression of someone who looks and acts important without actually doing anything.  I thought I pulled it off quite well!

Nick, perched way up high, set to with Chris’ chainsaw, which was quite possibly the most powerful hand-held chainsaw I had ever seen, while Chris directed all activities from the ground.  The speed at which the saw cut through almost metre thick branches was breathtaking, making my chainsaw look like a child’s toy.  Why was this saw so impressive? I later learnt that Chris is a lumberjack athlete and one of just five members of the STIHL TIMBERSPORTS® British Team.  Chris and his teammates represent the UK in the wood chopping World Championships, attended by more than 100 athletes from more than twenty nations.  And I thought that competition wood chopping was something they only did on the other side of the Atlantic.

While Nick wielded that beast of a saw, it was apparent that his survey had failed to include a breeding pair of Apache helicopters (one for the next risk assessment perhaps?).  Presumably on a low-level navigation exercise, the Apaches thundered overhead.  It would seem that their flight planning and ops brief hadn’t revealed areas of intense chainsaw activity.  I guess that the pilot had a bit of a shock when he saw Nick directly ahead at the very top of the tree; I swear the pilot pulled up to avoid a tin-opened fuselage!  Low or what!  Lessons presumably learned; the helicopters were back an hour later on a reciprocal track but much further to the north. 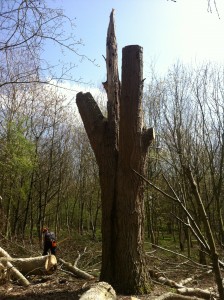 I digress.  As the morning wore on, the tree was gradually reduced to a main trunk with greatly shortened limbs.  The dead upper trunk was also left for the woodpeckers to add to their hole collection.  I consider that the tree is now something of an artful feature and worth a look next time you’re going past.  With the site made safe, it was up to the Forest of Marston Vale volunteers to commence the clear up a few days later. 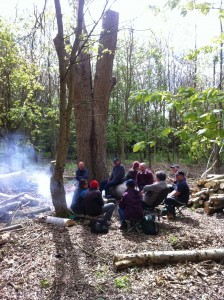 The volunteers are a valuable bunch.  They all seem to have a wry sense of humour which is presumably reflected in the fact that they don’t get paid for what is ostensibly hard labour with hand-tools.  It is my experience that humour invariably emerges as the driving force in groups of likeminded people when faced with the seemingly impossible: our cash-strapped armed forces are proof of this concept.  With bow-saws and bill-hooks, the volunteers turned the brash (smaller branches) into a windrow dead-hedge along the edge of the Sustrans, adjacent to the big tree.  Dead-hedging is an environmentally friendly way to dispose of the brash and, at the same time, create a habitat for hedgehogs and nesting birds etc.  The volunteers also made a gap in the hedge with a view to possibly creating a picnic area near the great poplar.  To test the picnic site idea, the volunteers wasted no time in brewing up with the infamous and very appropriately named volcano kettle!  Campfire tea – you can’t beat it for that unique taste of charred volunteer.

There is still much to do and, at the time of writing, the task is ongoing.

If you want to get involved and become a volunteer then visit the Forest of Marston Vale at marstonvale.org.