Displays of the dead 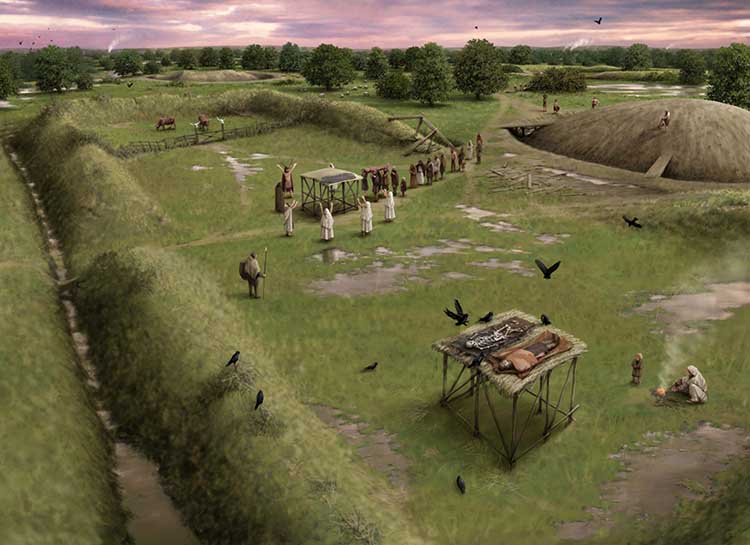 You are looking down towards one of Bedford’s most important Neolithic mortuary areas. Communities gathered here for important ceremonies over 4,500 years ago to lay out the recently deceased to the elements. Later generations built circular mounds beside the Neolithic mortuary grounds. Archaeologists still don’t know what the mounds were for but examples elsewhere suggest that many were used for the burial of high-status individuals in the Bronze Age. Illustration by Pete Urmston

Neolithic farmers built the wooden platforms between 6,000 and 4,500 years ago on low islands surrounded by wetter, wooded land. They are part of a ‘lost’ prehistoric landscape between the River Great Ouse, Willington and Priory Country Park, where people lived, farmed, hunted and held ceremonies over thousands of years.

The Neolithic farmers created mortuary areas enclosed within banks and ditches to make ‘sanctified’ ground. At least four of these mortuary enclosures have been spotted as cropmarks. They are either four-sided rectangles or five-sided pentagons when seen from the air, and are about 35 metres to 70 metres across. Similar enclosures have been found in Northamptonshire, East Yorkshire and Wiltshire. 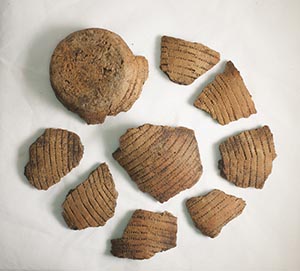 Fragments of a beaker decorated by pressing the teeth of a comb into the damp clay before it was fired. It was found close to the mortuary enclosures and dates from between the late Neolithic and early Bronze Age. (image Bill Bevan)

Mortuary enclosures often had more than one entrance, probably one each for the different families who brought their dead to be exposed inside them. They would have held funeral rites as they placed the dead person on a platform supported on timber posts. The flesh rotted away from the corpses, and was eaten by maggots, rats, crows and other wild animals, until only the bare bones remained.

Not every dead person was brought here, with only special individuals chosen. They may have been important people or those who died at auspicious times. People collected the leg and arm bones, ribs and skulls to store in chambered tombs. These tombs are large stone and earth mounds found across north-west Europe. Well-known examples include West Kennet long barrow near Avebury, Newgrange near Dublin and Maes Howe on Orkney. Inside these mounds, the bones were placed in chambers and sometimes grouped by type, with leg bones in one place and skulls in another. The bones were taken out and used in ceremonies in front of the mounds. West Kennet had an impressive stone façade to act like a theatre stage for these rituals. The ceremonies emphasised the shared ancestral past of several communities so bringing together families who normally lived in different locations across a region. Communities also used their ancestors to assert their rights to occupy the land. If they could declare that their ancestors lived, grew crops and reared livestock in a place, they could ward off any claims by other groups. 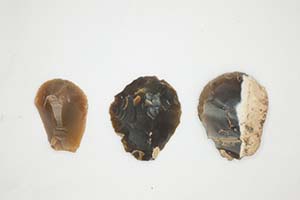 How would you fancy cleaning an animal skin with these flint scrapers? They were used to prepare hides during the Neolithic and Bronze Age. (image Bill Bevan)

Find out about similar exposure of the dead carried out by Tibetan Buddhists and Persian Zoroastrians. Watch a Tibetan sky burial.

One crop mark may be the remains of a cursus. A cursus is a long, narrow enclosure – well-known examples include the Dorset Cursus on Cranborne Chase and Stonehenge Cursus. Closer to home there are cursuses at Biggleswade in Bedfordshire and along the Ouse Valley in Cambridge. These mysterious features were once thought to be Roman chariot racecourses, but are now known to date to the Neolithic period. They often connect large funerary mounds and may have been used for ceremonial processions or ritualised archery competitions. 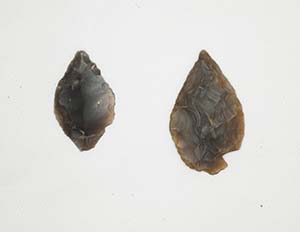 There were also many  low, earth and gravel, round mounds enclosed within single and double ring-shaped ditches, approximately 22m in diameter. The mounds probably covered burials dating from the end of the Neolithic period and the first part of the Bronze Age, approximately 5,000 to 4,000 years ago. They were built as the mortuary enclosures began falling out of use. They align on the earlier mortuary enclosures, probably as later generations changed funerary rites but wanted to venerate the older, sanctified ground.

Parts of the area now within Bedford River Valley Park were occupied and farmed by Iron Age and Romano British communities.

Anglo-Saxons may have also used some of the prehistoric round barrows for burials.

The mortuary enclosures and other archaeological features show that this, and other areas of Bedford River Valley Park, was used by generations of families over thousands of years during the Neolithic period and Bronze Age. All of the features survive as ditches cut into the gravels. The deeper soils in the ditches encourage crops to grow taller, revealing the patterns of features on aerial photographs. The pattern of these ditches is complex and often difficult to disentangle, but archaeologists have excavated parts of them during work in advance of gravel extraction and construction of the A421.

You can see the locations of some of these enclosures by visiting the National Cycleway Route 51 where it crosses over the A421.