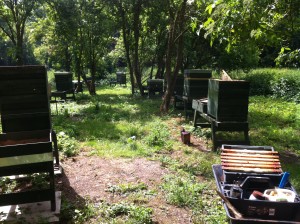 The apiary in Willington Woods

It is that time of year when bees (and others) are fully committed to reproduction.  Have you ever seen a swarm of bees?  And I mean a real swarm – when the sky grows dark and that chronic tinnitus (caused by years of exposure to jet engines) is drowned out by a new buzzing that is, well, really loud.  It sounds alien and aggressive!  Standing directly under the airborne swarm, individual bees can be seen but their speed and multiplicity morphs them into black meteoric streaks.  Awesome, if just a little scary!  In a short while, the bees will begin to settle nearby.  Possibly in a bush or tree; but anywhere might be convenient.  Bizarrely, despite the noise and frenzied activity, the bees are in quite a benign state and are unlikely to sting.  That being said, best not to get too close unless you really know what you are doing!

Typically, April to July is honeybee (Apis melliferra) swarming season in the UK.  Over the years, I have seen swarms hanging in trees, on buildings, bicycles, cars and even on missiles attached to aircraft (I guess that would have be a Stinger missile!).  The bees don’t care what they latch on to: all they want is a temporary staging post while they look for somewhere more permanent to live. 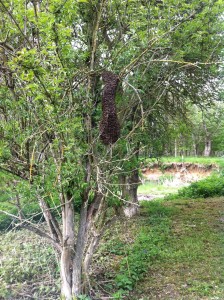 A swarm in Willington Woods

Swarming is a natural process and is a form of non-sexual reproduction.  The queen bee (there is only one in each colony) leaves the hive with around half of the colony bees.  The “decision” on who leaves and who stays is simple: the flying bees leave and the non-flying house bees stay.  In the summer, a bee lives for around six weeks.  For the first three weeks a bee’s “career” is confined mostly to hive maintenance activities.  It’s generally known as a “house” bee and, although it can fly, it spends most of its time tending to the needs of the colony by guarding, cleaning, tending to the queen, producing wax and turning nectar into honey.  After around three weeks, house bees become foraging (flying) bees; for the second half of their short lives they will literally work themselves to death collecting nectar and pollen up to two miles from the hive.  This hierarchy conveniently creates two groups (house bees and foraging bees) that are approximately equal in number.

Now, one must acknowledge that the worker bees are all female.  In human terms, it is they who do the cooking, cleaning, feeding the rest of the 50,000 strong family and tending to the household management.  My wife never lets me forget this!  However, there is a sub-group – the male or drone bees which accounts for around 10% of the hive population during the swarming season.  Drones can’t sting and they don’t feed themselves.  One could say (if we again put this into a human context) that they effectively spend their lives eating, drinking, watching TV and thinking about the queen bee a lot.  Remind you of anything?  But “drone paradise” has a cruel twist: mating is always fatal and in late August all the drones are permanently kicked out of the hive as the rest of the colony prepares for winter – no point in feeding superfluous mouths in lean times.  Because drones can’t feed themselves, they will be dead within a few days of their expulsion.  It’s a cruel world!

When the colony swarms, the queen leaves the hive with all the foraging bees.  Again, putting a human face on the antics of bees, like many households, the boss isn’t actually the man of the house!  However, in this case, the outgoing queen will have made preparations to create a successor for she will have laid an egg in each of a number of queen cells.  These cells are special wax structures specifically constructed to ensure the continuance of the colony.  When fully formed, they look a little like an un-shelled peanut stuck on the side of the honeycomb.  Each queen cell will contain a single embryonic queen and the first one to hatch will reign supreme.  And, in true Shakespearean style, the new queen will make quite sure that she cannot be usurped by any of the un-hatched pretenders.  It’s a vicious world.

Beekeepers must practise effective swarm control, and early detection of queen cell construction is vital.  The beekeeper (whose brain should have around 23 billion neurons) will use the natural swarming process to increase the number of hives and control the bees’ urge to abscond.  However, it’s when the skies go black that we realise that the bees, with just 960,000 neurons, have once again outsmarted a bigger brain. 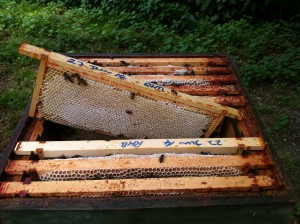 But we don’t just keep bees so we can make lots more bees.  These clever little insects also produce honey.  I say clever because the process of making honey involves collecting dilute sugar solution (nectar) and transporting it to the hive for processing.  This “ripening” process is complex and involves storing the nectar in specially constructed honeycomb cells, adding various enzymes and removing excess water.  The water content of nectar is quite high (anything up to 80%) and it is only when the water content falls below 20% that we may call the processed nectar honey.  Above 20%, it is still effectively a sugar solution that could ferment in the jar.  Somehow, the bees know when the honey is ready, after which each honey cell is sealed with more beeswax for long-term storage.  We remove the surplus honey but it is essential that the bees have enough stores to see them through the next winter (honeybees don’t hibernate).  We often substitute the bees’ winter honey stores for sugar syrup which is fed to the colony, via a special feeder.  To a bee, syrup is just has good as honey and I’ve never heard any of them complain yet.

A beekeeper can tell when the honey water content is below 20% by using a little optical tool which measures the refractive index of the honey.  How does it work?  Honey is full of various sugars and so the refractive index (the ability of a clear material to bend light) is higher than that of more dilute nectar.  Here is a simple DIY experiment that can demonstrate that the refractive index of a sugary solution is different to plain water.  You will need two straight half-pint glasses, each filled about three quarters full of water.  You will also need two pencils and some sugar.  Fill one glass with water and stand the pencil in it.  Looking down the length of the pencil, you should be able to see that the water bends light and that the pencil appears to bend at a shallow angle as it enters the water.  Now add at least two dozen teaspoons of sugar to the other glass and stir until dissolved.  Stand the second pencil in the sugar solution and compare the angle with the pencil in the plain water.  Look very carefully and note that the angles are slightly different.  A refractometer works in a similar way but the difference is projected on to a water percentage scale viewed, in my case, through an eyepiece.

We all know that bees produce honey and I’m told that my bees, resident in Willington Woods, produce some of the finest around.  But there are other reasons for keeping bees: it’s an environmental thing and local bees assist with local pollination.  There are other pollinators but Albert Einstein is attributed with claiming that, without bees, mankind could be starving within four years.  It’s a sobering thought!

So, whether you are picking fruit in your garden or blackberrying on a walk, spare a thought for the bees.  They deserve our respect: they will have worked hard all summer for you, and the fruit we might take for granted could easily have been pollinated by one of these incredible insects.